In a study of over 6,000 full-time employees at 250 early-stage startups, 4 out of 5 people who left did so before their 2-year anniversary, and 1/3 of companies lost someone during their first year in business. 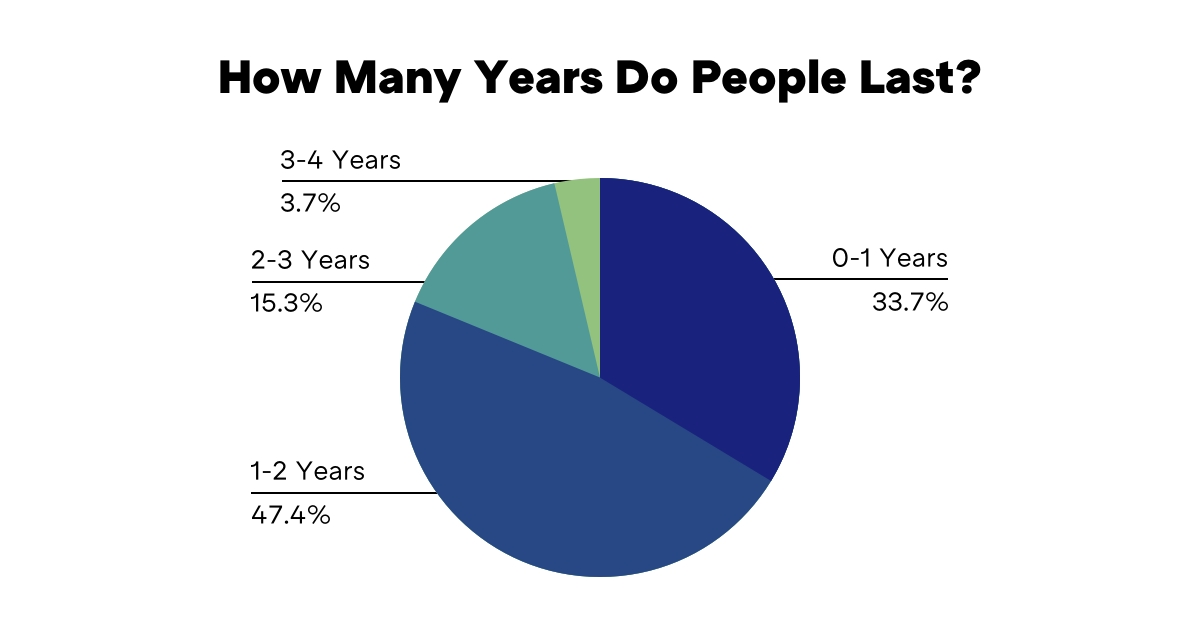 Early-stage startups are notorious for high turnover. But so far, no one has attempted to systematically measure that turnover or quantify its impact on the tech ecosystem.

So we decided to fix that, starting in our own backyard. To find the answers, For the Win gathered data on over 6,000 former employees across 250 early-stage startups in New York City.

Over 2/3 of companies in our sample saw at least one departure within the first 2 years, and over 1/3 lost their first employee in less than a year.

1/3 of employees in our sample left in their first year, and 4 out of 5 left before the 2-year mark. On average, they lasted about 17 months on the job.

3. These departures add up to tens of millions in waste.

Taken as a whole, they represent at least $18M in hard replacement costs and over 6 thousand person-years of experience lost.

How Soon Does Turnover Hit?

For most companies, turnover starts within the first couple of years. 35% of teams lost someone in year 1, and by the end of year 2, that number jumps to 73%. By year 3, almost all of the startups had seen at least one person leave.

How Many Years Do People Last?

Overwhelmingly, the employees in the sample had a 3-year expiration date: only 5% made it to their 4th year on the job. Most of them didn’t even get close to that cut-off: 34% left in the first year, and over 80% left by the end of their second year on the job.

What’s the Impact on the Startup Ecosystem?

In New York alone, early-stage turnover adds up to millions of dollars and thousands of years of lost experience. At SHRM’s estimated cost-per-hire of $4,129, the 2-year-old companies in our sample spent an average of $48,000 replacing lost employees, with the number jumping to $78,000 for the 3-year-old cohort. In total, our sample adds up to $18.2M in hard replacement costs.

Hard costs only tell part of the story, however—the experience lost to turnover is just as valuable, if not more. By the end of year 2, the average startup has lost 15 person-years of on-the-job experience. The impact on New York’s startup ecosystem is staggering: taken as a whole, our sample represents 6,255 years of institutional knowledge lost.

Companies: Collected from Crunchbase’s list of companies with headquarters in New York categorizes as “Early Stage Venture” (Series A and Series B) that were founded in the past 5 years.

Employee Departures: Collected from LinkedIn’s people search results, using the “Past not Current” company filter. All company records in LinkedIn were cross-referenced with company data from Crunchbase to ensure a match in cases where multiple companies share the same name.

Full-Time Only: Interns and those with “consultant”, “ambassador”, “contract”, “temp”, “interim”, and “freelance” in their titles were excluded from the data.

Calculating Tenure: LinkedIn shows years of employment for past employees, but not the month they joined. Since someone employed from January to December looks just like someone employed from January to February, the tenures were calculated by assuming a “0-year” difference as equivalent to 6 months on average, a “1-year” difference to 18 months on average, and so on.

Exclusions: Younger companies have been excluded in cases where they’d skew the data due to their age (e.g. a 1-year-old startup has zero turnover for years 2-5).